One highlight of the upcoming sale with 250 Lots on offer, include a ram who epitomises early growth.  Weaning at 76kg (3 ½ months), the ram will feature in the Jeparit based stud auction and is expected to garner attention from the prime lamb industry for his data.

“We have used this ram with success in our program and it’s great to be able to offer a ram of this calibre in the sale while retaining a semen interest,” principal David Pipkorn said.

Detpa Grove’s spring offering in October will begin with 70 maiden ewes, 1.5 years of age and ready for breeding.

A line of young ewes are sold at each spring sale with the stud keen to offer those producers looking to top up quality and gain access to new genetics, the opportunity to buy from the studs finest female lines.

“They are a structurally correct group of ewes with balanced ASBVs (Australian Sheep Breeding Values) and from the wide range of bloodlines we have at our disposal,” Mr Pipkorn said.

Along with 30 stud rams, 30 specially selected flock rams will also be up for auction.

“Stud breeders have been known to select rams out of the specially selected ram draft if they are after specific traits or something a bit different to complement what they have,” Mr Pipkorn said.

The main sale run will feature 130 flock rams with all rams being May to August 2021 drop.

Two home bred sires feature in the genetics of this year’s offering, being Detpa Grove Noble 180374, who Mr Pipkorn says has another great run of progeny, and Detpa Grove Regal 200477.

When it comes to outside genetics, Ella Matta 190004 will be one sire which bidders will see featured in the catalogue.

“We purchased Lot 1 (Ella Matta 190004) a couple of years ago and have been impressed with the growth and structure of that sheep, plus he’s throwing some black hooves which some breeders are chasing,” Mr Pipkorn said.

“There will also be progeny of Felix 191175; a semen package we purchased particularly for his eating quality to balance some Australian Sheep Breeding Values, as well as for its very good type and structure.

“There will be sons of Somerset 190158, a ram used widely in the industry, whereas we have produced some very interesting progeny from him. Particularly our leading index”.

“One son has great type, scale and bone, as well as balanced ASBVs – we were in a fortunate position to be able to target mate him to balance his ASBVs.”

Balance is a feature of all Detpa Grove’s flock, and a particular focus for Mr Pipkorn.

“We want to improve everything, not wanting to go too hard on one trait to the detriment of others – we are looking for balance, so our progress is steady but deliberate,” he said.

“It has also allowed us to have a big variety of genetics with similar performance traits.

“One of the other key aspects of what we offer is structure, fluent motion and correct in the feet and legs, we are pretty ruthless with our culling in this department”.

“This means we may not necessarily have the highest breeding values, but we have some of the best that are also teamed with structural correctness.”

A good start to the season has meant the sheep have grown out “exceptionally” well again this year, Mr Pipkorn added.

“The ewes have had no grain since birth, the rams had a couple of months of grain to get them through to the break, but they will be presented off grass – the stud rams are prepared as usual,” he said.

“Buyers can attend with confidence knowing sheep will be presented to the highest standard.”

“Some people have been moving into shedding breeds, which has meant sacrificing growth rates, but similar to Merino programs, they can then join cull ewes back to our White Suffolk sires to maximise prime lamb income – and I see this as a growing market,” he said.

The sale topping ram from the 2021 line-up was Detpa Grove 200182, a sire which purchaser Scott Mitchell of Rene stud, Culcairn, NSW, described as “the best ram I have ever purchased, and possibly the best I have ever seen.”

This year’s sale will be held on Thursday October 13 at Detpa Grove, Jeparit, and interfaced with AuctionsPlus.

Inspections will be open from 10am, with ewes auctioned at 11.30am and rams to follow at 1pm. 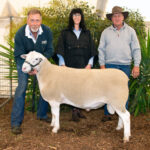 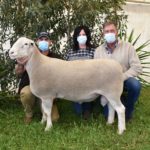