It is probable that last year’s stud ram average of $5625, where rams topped at $23,000, diverted many potential buyers’ attention to alternative sources based on anticipated price.

The winners were those clients who attended this year to compete for what they perceived to be the best genetics available. The value on offer was further emphasised when 13 of the 25 sold from $2000 to $3000.

Bruce Buswell had inspected the team after the Royal Adelaide Show and was after sons of A120321 and DG120657Tw to complement his previous but different Detpa Grove family lines that have bred on so well for him.

Bidding by phone link-up with Superior Selections, he was able to get his other top selection, DG140029Tw for $6000.

Considering the value – and being under budget – he also secured a late August-drop son of DG Ricochet 130066 in partnership with Keith Ladyman for just $2000.

Andrew Frick, Gypsum Hill stud, Padthaway, teamed up with Anthony Hurst, Seriston stud, Avenue Range, to ensure they got their top selection. They were successful on DG140357Tw for $7000. However, considering the great value on offer and despite missing out on the $8000 ram Ian Kyle bought, they added three more impressive young sires at $2000 and $3000 twice to still land inside their original budget for one.

The flock ram draft was greatly appreciated by the commercial clients, with 150 selling to $1800 and averaging $995 – well up on last year when 112 averaged $926. This was despite this year’s extremely poor season in the region. 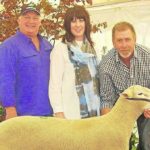 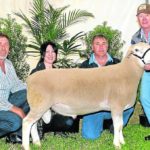